NICOLAS BERGGRUEN is the Chairman of Berggruen Holdings, a private company with operations in the U.S., Europe, and Asia, as well as real estate and financial investments globally.

Through the Nicolas Berggruen Institute, an independent, non-partisan think tank, he encourages the study and design of systems of good governance suited for the 21st century.

Berggruen is a board director of Zewail City of Science and Technology, Egypt; a member of the Council on Foreign Relations and the Pacific Council on International Policy. He is on the boards of the Museum Berggruen, Berlin, and the Los Angeles County Museum of Art, and is a member of the International Councils for the Tate Museum, London and the Museum of Modern Art, New York.

NATHAN GARDELS has been editor of New Perspectives Quarterly since it began publishing in 1985. He has served as editor of Global Viewpoint and Nobel Laureates Plus (services of Los Angeles Times (Syndicate/Tribune Media) since 1989. These services have a worldwide readership of 35 million in 15 languages. 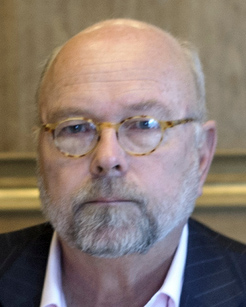 Gardels has written widely for The Wall Street Journal, Los Angeles Times, New York Times, Washington Post, Harper’s, U.S. News & World Report and the New York Review of Books. He has also written for foreign publications, including Corriere della Sera, El Pais, Le Figaro, the Straits Times (Singapore), Yomiuri Shimbun, O’Estado de Sao Paulo, The Guardian, Die Welt and many others. His books include “At Century’s End: Great Minds Reflect on Our Times” and “The Changing Global Order”. He is coauthor with Hollywood producer Mike Medvoy of “American Idol After Iraq: Competing for Hearts and Minds in the Global Media Age.”

Since 1986, Gardels has been a Media Fellow of the World Economic Forum (Davos). He has lectured at the Islamic Educational, Scientific and Cultural Organization (ISESCO) in Rabat, Morocco and the Chinese Academy of Social Sciences in Beijing, China. Gardels was a founding member at the New Delhi meeting of Intellectuels du Monde and a visiting researcher at the USA-Canada Institute in Moscow before the end of the Cold War. He has been a member of the Council of Foreign Relations and the Pacific Council for many years. From 1983 to 1985, Gardels was executive director of the Institute for National Strategy where he conducted policy research at the USA-Canada Institute in Moscow, the People’s Institute of Foreign Affairs in Beijing, the Swedish Institute in Stockholm and the Friedrich Ebert Stiftung in Bonn. Prior to this, he spent four years as key adviser to the governor of California on economic affairs with an emphasis on public investment, trade issues, the Pacific Basin and Mexico.

Gardels holds degrees in Theory and Comparative Politics and in Architecture and Urban Planning from UCLA. He lives in Los Angeles with his wife, Lilly, and two sons, Carlos and Alexander.